In the 2020/21 academic year, the 600,000 international students enrolled in UK higher education institutions made up 22% of all HE students, and tuition fees from non-EU students represented 17% of UK universities’ total income.

The findings have been reiterated in the Student Migration to the UK briefing, published by The Migration Observatory at the University of Oxford.

The document confirmed that the all-time high student migration to the UK hit in 2021 was following the rebound after the “substantial reduction” in international student numbers as a result of the pandemic. 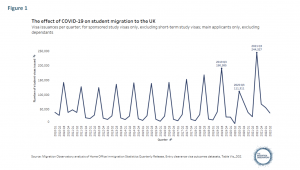 The Migration Observatory said that the 244,000 visas issued in Q3 2021 – more than in any other quarter since 2005 when the latest Home Office datasets began being recorded – could be down to the 2020/21 cohort of students delaying their applications for student visas due to the pandemic when remote learning was introduced.

According to research from QS in 2021, the UK was seen as a “much more attractive” and “welcoming” destination by prospective students, while agents have also more recently suggested they will place “significantly more” students in UK than they did during the pandemic.

The new research also noted that EU student applications fell by around 50% from 2020 to 2022, which the independent migration data analyst said was down to the need to apply for visas, higher international student tuition fees and not being able to access government-subsidised loans as a result of Brexit.

In 2021, UCAS reported a 56% decline in accepted applicants from EU countries, with numbers falling from 22,430 in 2020 to 9,820 in 2021. Experts have suggested that Ireland, the Netherlands and Germany are some countries which EU students are favouring above the UK. 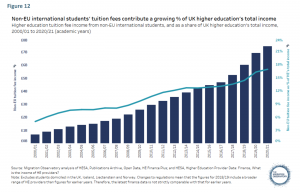 For the “low numbers” of students remaining in the UK five years after arriving in the country and want to settle, they tend to take 10 years to do so, it added.