While China, the US and Belgium are the first, second and third most expensive locations, an international school place in the UK will now cost parents on average £27,316 per year (up £1,068), according to ECA’s Education Report.

“International school fees have once more risen faster than inflation”

This makes it £18,351 more expensive than its closest neighbour, Ireland, where a year’s fees at an international school costs £8,965 on average.

While a weakened euro has seen many Eurozone countries drop in the rankings, Belgium remains the most expensive location in Europe, costing on average of £31,331 per year, according to ECA.

Following the closure of a number of large international schools, Russia has seen the biggest increase in school fees within Europe, increasing £2,289 to £19,534 on last year’s figure.

“Worsening relationships between Russia and Europe have led to many European teachers in international schools being denied visas. This lower supply of schools has led to an increase in fees as demand for places at the remaining schools grows,” said Kilfedder.

International schools in Asia have seen some of the biggest increases, according to ECA, with China retaining top spot as the most expensive location in the world, at £33,233 per year on average.

Meanwhile, a strong dollar against the pound means that parents in the US can expect to pay an average of £32,284 per year, increasing by £2,767 on 2018 figures.

“The price of private international schooling in the US has been steadily rising for several years now and this is expected to continue for as long the US dollar performs well against other major currencies such as the yuan,” explained Kilfedder.

“The US is already top for kindergarten and primary school fees so if current trends continue we could see international secondary schools in the US become the world’s most expensive too in the near future”.

The high cost of US education was also touted as a likely reason for the continued decline in new international student enrollments at undergraduate, graduate, and non‐degree level in the 2018/19 year.

The data also revealed that Israel is the most expensive country in the Middle East for international schooling, costing £26,376 per year on average, and £8,698 more expensive than the UAE (£17,678), the next costliest location.

Its increase of £2,779 sees the country move into the top ten most expensive locations in the world for the first time.

Conversely, the lowest international school costs in the Middle East can be found in Bahrain, where annual fees cost £10,373 on average. 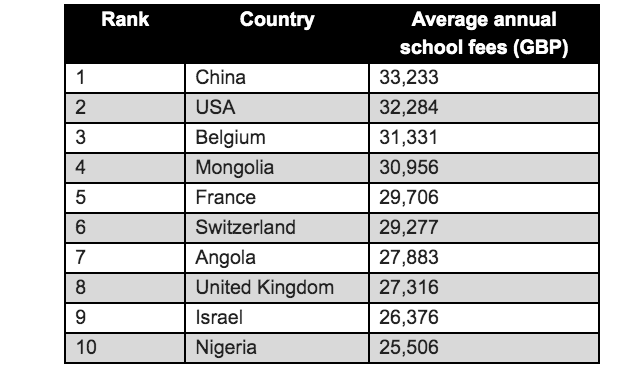 The post Int’l school costs on the rise, UK up £1K on 2018 appeared first on The PIE News.