Europeans losing out on UK internships

More needs to be done to allow young people from Europe to access internships in the UK, stakeholders have said.

Speaking at a session in Westminster, hosted by the APPG for International Students, representatives from a number of embassies in London raised the issues their citizens face when trying to gain work experiences in the UK.

“[Finnish] higher education institutions and student organisations have raised the concern that it is no longer possible to enter the UK labour market as an intern,” Birgitta Vuorinen from the Finnish embassy said. If there is a route, such as through Tier 5 Government Authorised Exchange, it “seems to be too difficult”, she added.

“The lack of the visa route for interns is now the big issue,” another representative from the Polish embassy added.

The issue also extends beyond Europe. A spokesperson from the high commission of St Lucia explained that students from the island state, and the wider Caribbean area, also share concerns around opportunities for executive development, internships and exchanges.

Head of global mobility policy at Universities UK International, Charley Robinson, highlighted that access to internships has been a “major source of concern in the post Brexit environment due to visa requirements, particularly for European partners”.

“Erasmus funded interns can use the T5 GAE visa route until May 2023 but with the tapering off of funding we are already seeing a significant number of problems for interns coming to the UK so this is pressing issue,” she said.

While the Turing program has been celebrated for its opportunities for UK students, the fact that it is not a reciprocal agreement has made it difficult to negotiate exchanges with EU partners, stakeholders suggested. 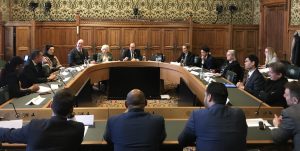 The APPG event was held on January 19.

Other countries are being asked to host UK Turing-funded students for internships and training, but the UK cannot offer the same opportunities for EU students, they said.

“It would be really good to look at ways in which we could move forward with creating a reciprocal arrangement,” Robinson said.

Membership director at English UK, Huan Japes, added that internship programs were and remain very popular with the organisation’s members. “We need a dedicated visa route for internships, definitely,” he said.

According to Erasmus Student Network UK, Brexit has led to two main practical barriers for European students wanting to do internships in the UK.

“Firstly, as the UK is no longer a program country of the Erasmus+ program, internships in the UK are no longer eligible for the majority of Erasmus+ funding, which prevents many students from being able to take part in (particularly unpaid) internships unless they have the means to support themselves,” Christie Dear, president of ESN UK, said.

“The current options are discouraging if not prohibitive, much to the UK’s own detriment”

“Secondly, prior to leaving the EU students were able to undertake internships in the UK without having to concern themselves with visas,” she told The PIE.

The Tier 5 (GAE) visa is costly – requiring proof of £1,270, with the visa itself setting applicants back £190 with those hoping to join internships for over six months needing to pay a £600 health surcharge.

“In a labour market dominated by unpaid internships, this presents a real accessibility issue, even without acknowledging the short timeframe and large amount of bureaucracy otherwise involved in the visa process,” Dear explained.

“This type of visa is also an issue as there is no possibility to extend it, meaning students cannot stay if full time work is found, which is detrimental to both these students and the businesses in the UK which would otherwise employ them.”

ESN UK, like English UK, would welcome a new route for these internships, “be this a new type of visa, or a visa exception for student/graduate internships of a certain length, much as there is for EU students studying in the UK for less than six months”, Dear added.

The barriers to internships are only a small part of the issues Brexit has caused for European students, she continued.

“There is unfortunately a systemic lack of clear information and direction following the UK’s withdrawal from the Erasmus+ program. If the UK government engaged in making its own study abroad program, Turing, inclusive by offering funding and support for incoming students to the UK, some of these issues could be solved.”

With a great international reputation for high-quality education and internships, which many of the EU’s best and brightest students would love to benefit from, the UK – its universities and businesses – is missing out, Dear concluded.

“Unfortunately, the current options available for these students are discouraging if not prohibitive, much to the UK’s own detriment. As advocates for accessible, inclusive international education and mobility opportunities, we implore more to be done to ensure (incoming and outgoing) students receive the necessary support.”

The post Europeans losing out on UK internships appeared first on The PIE News.