Canadian prime minister Justin Trudeau promoted the value of the French language and of studying in Canada at the 18th Francophonie Summit which took place in Tunisia from November 19-20.

The main theme of the conference was ‘Connectivity in diversity: Digital technology, a vector for development and solidarity in the French-speaking world’.

Trudeau announced $20.8 million in funding over four years, for the Organisation internationale de la Francophonie to continue implementing its mandate and programming in key areas, including inclusive governance and growth, promotion of the French language, democracy and human rights, education, and economic cooperation for sustainable development.

“Canada is working actively with the Organisation internationale de la Francophonie in its efforts to promote and protect the French language, cultural diversity, and important common values such as peace, democracy, and human rights,” said Trudeau.

“We will continue to work together to strengthen Canada’s already strong ties with other Francophone countries and create opportunities for our peoples,” he added.

A further $2.4 million, over four years, was pledged for the Agence universitaire de la Francophonie – a global network of French-speaking higher-education and research institutions. The aim of the funding is to continue promoting cooperation between Francophone academic institutions, improve access to quality education for learners and support professional training and research.

Met with @FrancoisLegault today at the #Francophonie Summit. We spoke about promoting the French language, while working in closer collaboration to grow our international partnerships and support people in Quebec and all of Canada. pic.twitter.com/J03Q6vYxWM

Originally planned to benefit 24 developing countries, 26 eligible nations have since been announced. Most are in sub-Saharan Africa and 75% are Francophone. 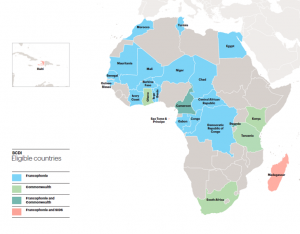