“Where London leads; I have no doubt the rest of the country will follow” was the message from Chris Skidmore, former minister of state for universities, speaking to representatives from twenty-five of London’s higher education institutions at a roundtable event in Westminster this week.

The event, organised by London Higher and Oxford International Education Group, included insight from IDP Connect and Nous Group and signalled the start of a renewed effort from stakeholders in the English capital to reestablish ‘brand London’ in the face of strong global competition from the US, Australia, Canada and New Zealand.

Skidmore, speaking via video link from Brussels as part of a UK Parliamentary Partnership Assembly, warned against the UK standing still in setting new international recruitment targets, saying ‘last year the Department published an update to the international education strategy, reaffirming a commitment to reaching the milestones mentioned; yet it lacked any new ambitions or policy innovations.”

The UK national target of 600,000 international students attending British universities (and generating an annual education export market of £35 billion) was reached ten years ahead of schedule, due in part, to the reinstated policy lever of a post-study work visa in 2021, but also due to border closures and travel disruption for competitor destinations during the pandemic. 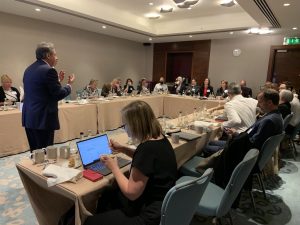 The role of the UK’s first international education champion and the role of the mayor of London, were highlighted as a way of spearheading any successful strategy through leadership. Skidmore explained: “the establishment of the powerful figure of an elected mayor of London not only transformed democratic politics and its accountability, it has led to deeper investment and strategic delivery of priorities that have also transformed the city for the better; I believe that there is much more that can be done to deliver across a locally devolved agenda in education.”

David Pilsbury, chief development officer at Oxford International Education Group, acting as chair of the meeting, said that national Parliament was “not listening” and expressed the need for a “common vision and and framework [amongst London institutions] to bring in industry support from the private sector” reflective of a world leading study destination.

Oxford International Education Group works in partnership with the University of Greenwich to operate one of the largest international pathway centres in London.

Simon Emmett, CEO of IDP Connect, referencing the IDP Emerging Futures survey taken by applicants and offer holders in February 2022, confirmed that the leading motivating factors for international students choosing to study in London were career development and breadth of education – different to the wider UK picture where educational quality scored higher as a priority.

“Everyone asks me who the next China will be? Apart from India, there is no new China.”

“When we slice the data by students only interested in London we see a key motivating factor is educational options, the diversity of the offering in the city of London” explained Emmett, positioning a London-wide recruitment plan as a sensible way to meet this expectation as a united, yet diverse offering. 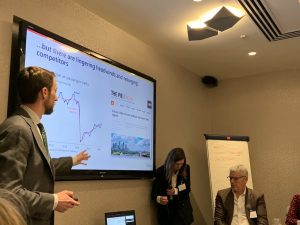 Skidmore asserted that “a London international education strategy would also allow the London HE sector to align its focus around shared priorities and challenges. I would suggest that for a first strategy, this might include how London can reverse the trend of losing market share in overseas enrollments to the rest of the UK.”

Application data evidenced by Matthew Durnin, principal at Nous Group, supported this observation, highlighting that the number of international students enrolling in taught postgraduate courses in the UK in 2021 was in fact greater outside of London, driven by the recruitment success and impressive growth of regional teaching focused universities.

Durnin also reiterated the dominance of China and India as the large global source markets for international students for all study destinations – “everyone asks me who the next China will be? Apart from India, there is no new China.”

University stakeholders at the event expressed concerns about diversity and potentially attracting more branch campuses to the capital in what is already a competitive market.

They also expressed the need for wider themes about TNE, sustainability, student experience and graduate employability to be included rather than simply growth of global share.

Referencing the IDP Emerging Futures survey, Emmett also cautioned that of all the IDP students surveyed who had applied to the UK in 2021, only 38% had made the UK their first choice.

The PIE News recently reported on the Australian higher education sector heading to a ‘full recovery’ as it bounces back with pent up demand. Australia, New Zealand and Canada have all invested heavily in aggressive destination marketing online and offline in key source markets, often working collaboratively as geographical regions, states or territories.

Examples such as Study NSW and Study in Scotland offer a template of how a devolved, regional destination marketing approach compares to a single university offering, and the aim is for London to leverage its own “identity through a regional lens.” 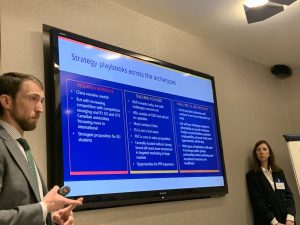 Another major consideration for the UK includes the dependency on China – with London seen as the only UK city long term that can match the size of a tier one city in China. “The dependence of the big research intensive universities in London on recruitment from a country that has an explicit policy of moving to becoming a net importer of globally mobile students presents a future challenge” said Skidmore.

However he also acknowledged the opportunity for strengthening possible TNE collaboration: “Is there not then an opportunity for partnership across the London HE ecosystem with Shanghai or the greater Bay area or other [comparable] major urban centres around the world?”

With the current political agenda in the UK focused on levelling up the social and economic opportunities across Britain, the suggestion of a London-centric international strategy will concern many people in the sector.

However there is a growing consensus that UK universities need to follow the example of competitors abroad by working together in closer regional alliances, maximise ‘place’ as part of their combined appeal and create collaborative policies on local resources such as accommodation and transport to increase capacity.

London Higher, the representative body for over forty universities and higher education colleges across London, will be coordinating the discussion on what a London International Education Strategy could look like moving forward, with a launch expected early in the next academic year.

Sarah Beech, CEO of London Higher explained: “It’s my job now to cut through the interesting debate and come to the practicalities of what we can do; the current government has a levelling up agenda but it can’t do the international education agenda without London.”