UK seeks to pull sector together to face “enormous opportunity”

The UK education industry must come together to promote itself to the world, a minister has urged, as a new national education export campaign is being launched.

Minister for exports at the department for international trade, Graham Stuart, highlighted that education is one of seven sectors included in the government’s Made in Britain, Sold to the World export campaign, as he appealed to providers to get on board with government export initiatives.

“[We are saying] to the education sector – from edtech to schools to universities to early years and across the board – that actually the global markets are opening up again and we’ve got to prepare for that,” he told The PIE.

“There’s enormous demand for British products and services and we need to get out there and take advantage of it or we’ll lose market share and lose out on an enormous opportunity.”

Thanks to some 1,000 UK edtech businesses, the government has projected the edtech market to reach £3.4bn in 2021.

The sector leads in Europe, attracting more than $1bn in investment since 2014, more than the next three countries on the continent combined, the government boasted.

DIT is also aiming to diversify student recruitment, Stuart said. “To do that you want to have a more resilient system.”

With input from immigration minister Kevin Foster alongside universities minister Michelle Donellan government has sought to work with the sector, he contended.

“I think we’ve seen government come together and and help deliver this international education strategy,” he said.

“[Smith] has had effectively a year as our education champion and will report back on progress made to date,” Stuart explained.

“Those are the five that were chosen by the industry partners as being the priority, but we have some other markets from China to other areas as well, which we look at.”

With Asia set to be home to 66% of the global middle classes by 2030, the government notes the region as one “hungry” for high quality British goods and services.

Additional markets the UK has said it is committed to supporting exports to also include Brazil, Mexico, Pakistan and the UAE. 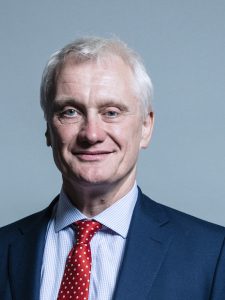 Other initiatives include a “streamlined” Ucas application process, alternative student finance, improving student experience and employability are all important, along with the new international teaching qualification.

The government is also looking to “scope out” a UK global alumni network with “digital at its heart” that maintains engagement after graduation, he explained.

“We do know if you can [maintain engagement], then maybe it’s more likely that their kids will come and study here. They’re more likely to do business with the UK and invest here and all the rest of it. That’s something which is really good.”

Despite the UK having a “genuinely world leading” offer, “we’re a little too modest about it”, he continued

“One thing you can be sure of is if you don’t ask [someone] to buy your service, you can pretty well guarantee they won’t. What you’ve got to do is get out there, you’ve got to get in front of people and you’ve got to tell them your story,” the minister said.

“People with much more inferior systems go out sounding so confident, and we’ve got to make sure that we go out there with real confidence and share it.”

Ahead of the global launch at the Dubai Expo beginning in late October, the UK government is looking to stimulate supply, along with demand.

“I think it’s – notwithstanding the ongoing and continuing challenges of the pandemic – a real opportunity. We want to get everyone to look outwards, think internationally and grasp the opportunities.”

“We want to get everyone to look outwards, think internationally and grasp the opportunities”

The government’s network of International Trade Advisors and education specialists will help to position UK providers as “partners of choice” and help investors and partners overseas to find UK providers, the government added. It also launched an Export Academy to grow international sales earlier this year.

DIT staff in 119 countries, along with the British Council’s work promoting UK education, have “got an awful lot of work going on”, Stuart added.

“The British Council is looking to do more and promoting and expanding the study UK campaign into more markets.”

However, POLITICO has reported that British Council offices and staff cuts have been made at a number of location as a result of commercial income losses during the pandemic.

A conclusion Smith has made is that the opportunities are “real and substantial”, Stuart detailed.

“We really do need to galvanise ourselves, government and the sector together to take advantage of it –those are his conclusions. I think he’s right,” Stuart said.

“But we’ve also got to prioritise if you want to make a real difference.

“We’ve got to concentrate our resources on where we think we’ll make the biggest difference while allowing the broad network, Universities UK International, individual institutions and companies… to make sure [the offer] is as joined up and coherent as it can be.”

The post UK seeks to pull sector together to face “enormous opportunity” appeared first on The PIE News.