UK HE exercising caution over use of aggregators

Higher Ed professionals in the UK are exercising caution before signing up with aggregator platforms, The PIE News has learnt. However, as these new recruitment businesses set their sights on the UK, only three per cent of institutions will not considering working with them, says one survey.

In a series of interviews with HE professionals, The PIE was told that there is concern that some aggregators may be too commercially driven.

However, while some said they are on the fence about whether to use aggregator sites, a recent UKEAS survey has shown that many are already using the platforms.

These sites, such as ApplyBoard, StudentApply, Adventus and CatalystGEM, enable agent recruiters to funnel applications through a “master” site which has commercial relationships with many more university partners than a small independent business or adviser could expect to have.

Out of 100 responses from UK university partners, 53.4% said that they work with aggregator platforms, compared to 28.2% who say they do not, according to the UKEAS survey.

“We are waiting to see how many of these new aggregators perform within the sector and can show that they understand the sector,” one HE professional, who did not want to be named, told The PIE.

“For me, there seems to be a little bit of a grey area between technology and education. Some, not all, of the aggregators appear to be more focused on the technology, and there’s a sense that perhaps the education part is secondary to the technology.”

A potential barrier to the uptake of aggregator platforms by UK universities is the perception that they are too commercially driven.

“We had about half a dozen approaches and we sat through probably four or five pitches. We listened to what they felt they had to offer. And from that, we then made a decision about the company we felt might be a good fit for our institution,” the professional told The PIE.

“There’s no doubt there’s a commercial element to the sector and our existing agents are ultimately commercial organisations, however this feels like it is the next level up in terms of the sort of pitches that we have received.”

In other interviews, The PIE was told that there is a view within the UK’s HE sector that some aggregators are “very commercially driven”.

A recent survey by UKEAS provided a data-led insight into what UK institutions currently think of aggregators and their business models.

Between June 8 and June 16, UKEAS conducted an anonymous survey of UK university partners which received 100+ responses. Approximately one-third of these respondents were Heads of International, or Directors and above. 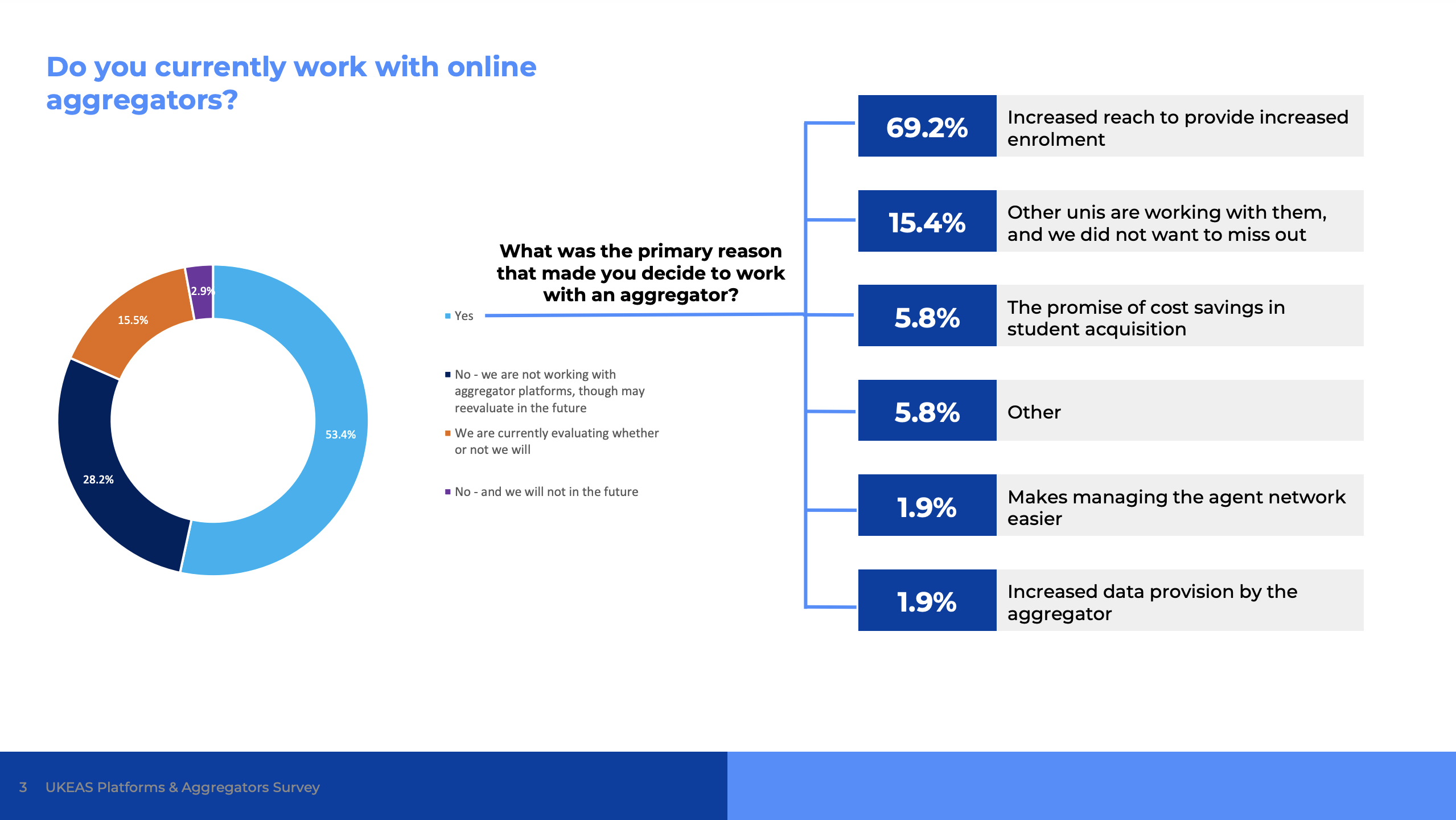 However, respondents to the survey provided a long list of concerns that they had with the use of aggregators. Some of these issues included UKVI risk, less control of brand and conflict with existing agent relationships.

Another concern cited was whether smaller institutions will see enough benefit if they engage with aggregators. 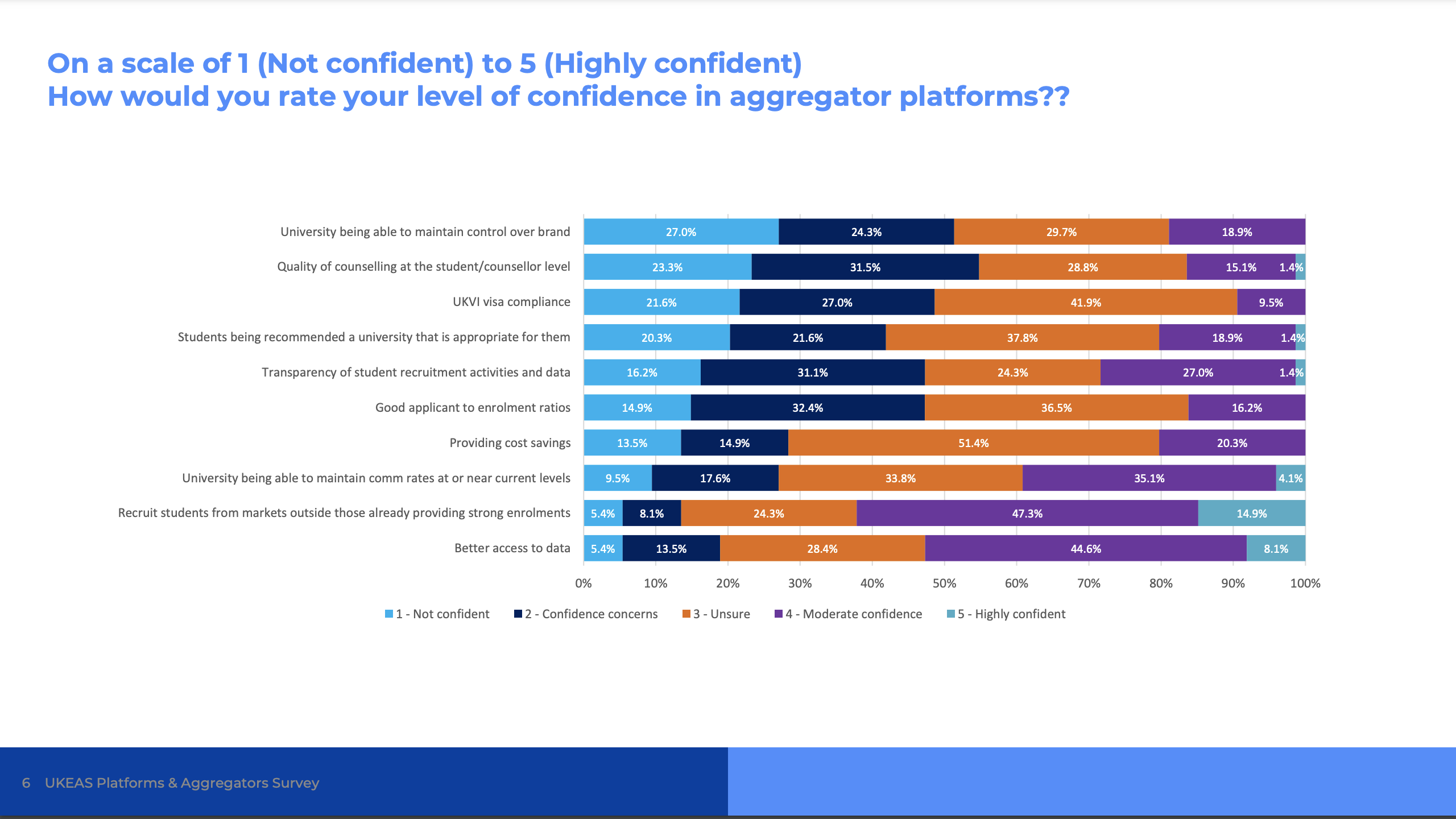 One of the HE professionals that The PIE spoke with said that one area of concern related to institutions not being clear about who the aggregators were working with.

“Some of the aggregators said absolutely, we can share the list of who we work with if that’s something that you want to see,” the professional said.

“Others were less keen to share that information with us. What they were all reasonably open on was if we had particular partners that we didn’t want to work with, or perhaps partners that we had previously worked with … that would be taken on board.

“But the fact that a number were not comfortable sharing the list of who they work with, set some alarm bells for us as well.”

The post UK HE exercising caution over use of aggregators appeared first on The PIE News.