Factors influencing students’ and parents’ decision-making in study abroad have changed during Covid-19, some 80% of agents responding to a survey have indicated.

The survey of 1,126 agents from 79 countries, carried out by INTO University Partnerships in early November, found that four in five educational counsellors and agents had recorded shifts in the study abroad decision-making process.

Students and parents are “increasingly price-sensitive”, 65% of agents suggested, and are focusing on scholarships and other forms of financial aid. A further 61% said clients are now more centred on career outcomes when compared to pre-Covid-19 and 49% suggested there is a stronger demand on return on investment.

When broken down into regions, the 219 agents from China, HK and Macau said the greatest change was the focus on career outcomes, with 68% nodding to that being a change. While only 19% of the agents from the region said that clients are looking for scholarships and bursaries, those in other regions suggested it was much more prevalent change.

Some 86% of the 94 South Asian agents, 82% of the 387 agents in East Asia and 77% of the 173 agents in the Middle East & Africa all agreed that students and parents are increasingly looking for scholarships and bursaries. 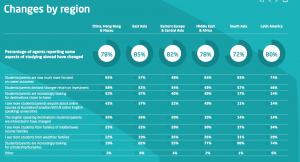 “As study abroad aspirants navigate the new terrain before them, they’re counting on international education to give them every advantage toward future success,” said Olivia Streatfeild, CEO of INTO. “Accommodating their demands is critical to continued recovery.”

Measuring opinions on how the UK, the US and Australia have performed during the pandemic, agents suggested that the UK had been most successful in terms of Vaccine roll-out, Quarantine, Borders and Welcome and safety. 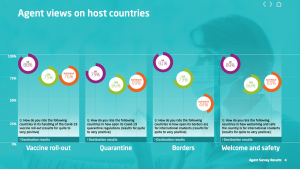 An “overwhelming” 89% of education agents feel positive about how welcoming and safe the UK is for international students, INTO said, while 69% and 66% said the same of Australia and the US, respectively.

Of the 387 agents in East Asia responding to the survey, 39% said the UK can expect ‘significantly more’ students in the next near, while 24% said the same for the US and 15% for Australia.

Since the first two weeks of November when the research was carried out, Australia has however announced borders will be open for students from December 15.

While 95% of respondents stated that student demand will return to primarily face-to-face learning moving forward, 72% suggested that more students now are interested in blended delivery than before the pandemic.

The interest in blended delivery “demonstrates how critical it is for the sector to build flexibility into education delivery — and always adapt to meet students’ needs where they are”, Streatfeild added.

Additionally, the research found 45% of agents have seen changes in subjects students are seeking to study, with 24% pointing to a greater interest in computer science and related specialities in robotics and artificial intelligence.

Some 27% of agents said work opportunities in destination countries is set to be the greatest factor on decision-making over the next five years, while 21% said countries’ immigration policies will be key.

“National programs that empower international students to live and work in their destination countries after earning degrees aren’t just nice to have — they’re essential. Not only do they enhance countries’ ability to compete for global talent, they protect the immense contributions of international students to local communities and national economies,” Streatfeild concluded.