Agent aggregators could pose a risk to universities as they try to re-establish global student flows in the post-pandemic, stakeholders have warned.

In an opinion piece in University World News, founder of Asia Careers Group SDN BHD, Louise Nicol said that while the “lure of the aggregator argument is seductive, it is unlikely to be as benevolent as it seems to any of the parties involved”.

She argued that the agent-student-university relationship is an ecosystem which has taken time to develop and where good service encourages repeat business.

“Breaking that link with a system where a touch of a button allows numerous applications for a single candidate brings a number of downsides,” she said.

“The rise of agent aggregators encourages agents to focus on multiple countries for their student applicants, but this may not be as desirable as it sounds.

“The idea of agents is that they are market experts, know their client institutions inside out and can effectively advise students, but widespread use of agent aggregators could lead to a deterioration in the quality of advice provided,” she added.

In the opinion piece Nicol spoke about an agent initiative from Ryan Trainor, CEO and co-founder of Adventus.io, posted on his LinkedIn. Trainor’s post said that for the month of April 2021, Adventus will give US$100 for every five students “lodged to an institution in Canada or the USA” with a guarantee that the application will be placed within 24 hours.

She argued that students deserve to know when their details are being shared with “numerous higher education institutions and an extensive network of agents”.

“Universities should also be aware that their brands are being used to secure traffic for the agent aggregators, both in terms of student engagement and growing their network of agents. One can only hope everyone is entering into these partnerships with their ‘eyes wide open’,” she said.

Trainor explained to The PIE News that the initiative was conceived as a way to support agents who have suffered financially as a result of Covid-19.

“They’re our business partners and may not have been able to access revenue for nearly 12 months, and it could be actually longer. And a lot of these agents are going out of business.

“As we are getting a 91% success rate of application offer from universities, it was almost like, how do we provide a stimulus for our agents and try and work with them to ensure that they’ve still got a livelihood once the market comes back?”

Trainor said that the industry, and more importantly the student, does not want agents to go out of business as this could have a profound impact on students’ choice.

He added, it has been a practice for a long time by universities to work with agents to waive application fees and other incentives as well.

“The whole focus of the Adventus.io marketplace is to maintain transparency, from passing on 100% commission to recruiters, to initiatives like this that support the agents through these challenging times. And it was absolutely well received,” he said.

A recent report from BUILA and UKCISA explored UK HEs concerns towards the use of sub-agents. While the report did not mention aggregators specifically, it’s findings could be seen as relevant to those digital recruitment platforms that use sub-agents.

It found that most HEIs (61%) agree to the use of sub-agents if the contracted agent has HEI consent. However over half of the respondents said they are concerned about their lack of direct control over sub-agents.

The report said that sub-agents have been an “area of concern” for HEIs for some time (in the UK and overseas) and have led some HEIs to stipulate in their education agent contracts that sub-agents are not permitted and their use would be in violation of the contract, or that sub-agents may be permitted by written agreement with the HEI. 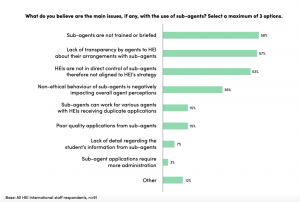 According to the report HEI staff worry that the sub-agent, who may not have been through the HEI’s agent training, could misrepresent them to the student and the quality of services may be substandard.

In a second opinion piece for University World News, Nicol spoke about the report in relation to large student recruitment aggregators.

She noted that Edified was commissioned prior to the “meteoric rise of the aggregators”, but provides “a strong foundation for thinking about this development in the global higher education landscape”.

“Given the current pace of change, it’s troubling that a ‘route’ to a quality framework is only emerging when agents have been increasingly influential for three decades,” she said.

“That is really the point that emerges from consideration of the risks and challenges of a rapidly developing new approach to recruiting students. Universities are ill-prepared to engage effectively to ensure that they are not being misrepresented or that students are not being misled.”