A new study has documented the impact of the Scholar Rescue Fund, a project launched by IIE trustees in 2002 as a global program for threatened and displaced scholars.

It noted that “alumni have imparted their knowledge to more than 52,000 students in over 1,600 academic courses, supervised more than 2,600 student theses, and mentored over 800 junior faculty”.

The research used the survey responses of more than 200 IIE-SRF alumni from 38 countries, showing their contributions.

It revealed that “they have conducted and published innovative research, cultivated enduring relationships with students and colleagues, contributed to the improvement of educational institutions in their home and host countries, and championed social justice in their communities”. 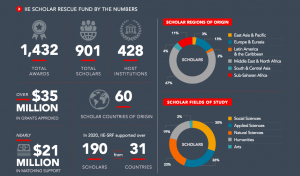 “The need for impactful, cutting-edge research and fresh ideas that advance social justice is more apparent today than ever,” said Mariët Westermann, chair of the IIE-SRF Selection Committee.

“The need for impactful, cutting-edge research and fresh ideas that advance social justice is more apparent today than ever”

“This study demonstrates that IIE-SRF alumni are improving their communities and the world around us on a daily basis, acting as educators, experts, and change makers on and far beyond their host campuses.

“And while we celebrate these scholars and their achievements, their success only increases our resolve to support the many threatened academics worldwide whose contributions would otherwise be lost. We collaborate with many governments, donors, universities, and other partners to rescue and support these scholars, and invite you to join us in this vital work.”

The survey found that alumni have: