US IEP numbers drop further 3.5%, but decline is “stabilising”

The numbers of international students joining intensive English programs in the US fell by almost 3,000 students in 2019 compared with the previous year, but the continued decline is “stabilising” according to analysts.

However, English USA revealed the “sobering statistic” that at least 80 IEP programs had closed in the past three years. 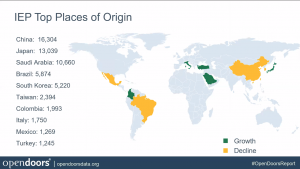 “While the overall number of IEP students continued to fall as of 2019, it’s particularly notable that the level of decline has begun to stabilise,” Julie Baer research specialist at IIE said.

“Asian places of origin had a modest decline due to a decrease in the number of students from China,” Baer continued.

Latin America and the Caribbean, and Europe saw a “mixed picture”, Baer added, while an increase from the Middle East and North Africa region was driven principally in a rise of students from Saudi Arabia.

Saudi Arabia and Brazil are two source countries where changes in government-funded scholarships have caused large drops in students in recent years.

The numbers of students from Saudi Arabia peaked at around 38,000 in 2015 before changes resulted in “the number of IEP students falling significantly”.

“However, we have recently seen a stabilisation of this, and as of the 2019 calendar year, the number of students was just above 10,000, indicating a slight increase over the prior year,” Baer noted.

Similarly, the Brazil Scientific Mobility Program that launched in 2011 contributed to numbers of Brazilian students peaking in 2014 to just over 14,000.

Changes resulting in an immediate “steep decline” have levelled, Baer added, and the annual figures around 5,000 have” stabilised at a much higher level than when the program began a decade ago”.

English USA executive director, Cheryl Delk-Le Good, warned the sector is facing challenges around staff layoffs, teaching face to face and online concurrently and the reputation of the US.

Since 2017, English USA has reported that 80 IEP had closed, with 24% of closure having been university-based programs and the remainder independent multi-site programs.

However, the University and College Intensive English Program organisation added that its membership has remained stable around the 80 mark.

The “rollercoaster” of USCIS changing its guidance for online learning this summer had “really [left] intensive English programs even further out in the cold”, Julie Strecker president of UCIEP noted.

“The way we look at the data is going to change”

“I’m glad that [the decline’s] starting to level off, that it isn’t as steep decline as it has been in previous years,” said Strecker, adding that the 2019 data is “the end of an era”.

“It’s probably the last year we’re going to see data reported simply on how many enrolments you have.

“It’s just that capstone to the last era and the final benchmark moving forward.”

The post US IEP numbers drop further 3.5%, but decline is “stabilising” appeared first on The PIE News.