US HE at risk of losing $4.5 bn, NAFSA estimates

Without financial relief and congressional action, the US higher education sector is at risk of losing more than $4.5 billion due to the coronavirus fallout, NAFSA: Association of International Educators has warned.

A survey of US higher education and international education senior leaders also found that the sector had potentially lost almost $1bn as a result of shortened or cancelled study abroad programs.

International student enrolment declines expected for fall 2020 will result in higher education in the country losing at least $3bn, the organisation added, and many thousands of American jobs are anticipated to be lost.

“With travel restrictions, visa delays, and economic instability worldwide, Covid-19 has been incredibly harmful to the field of international education,” said Esther D. Brimmer, executive director and CEO of NAFSA.

“We need Congress to support legislation protecting international education to save American jobs and ensure US students remain globally competitive at a time where we cannot afford to lose our competitive edge.”

NAFSA has appealed to Congress for direct financial assistance totalling $46.6 bn and called for mandatory in-person visa interviews to be waived.

Carried out in early April, the survey – which received 346 institutional responses – found that 94% of institutions with study abroad programs reported shortened or cancelled spring and summer programs, resulting in losses of $115 million. When estimated across the entire US higher education sector, potential losses would total nearly $1bn. 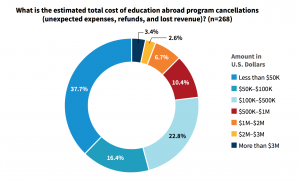 Some 38% of respondents said they had been supporting international students still on campus in the US, spending nearly $42m on housing, scholarships, food, rent, airfare, and tuition refunds.

When extrapolated across the country, NAFSA predicted potential spending totals of $418.5 million.

If the 78% anticipating enrolment declines for fall 2020 leading to potential losses in $192m is similar for other institutions across the US, total revenue losses will amount to at least $3m, the organisation said.

Six in 10 survey respondents said that up to five staff at their institution were funded by international student fees.

A recent Institute of International Education survey revealed that almost all US higher education institutions anticipate that international student enrolment will decline in the 2020/21 academic year, with a third (30%) anticipating a “substantial” drop off in numbers.

The post US HE at risk of losing $4.5 bn, NAFSA estimates appeared first on The PIE News.