Most institutions expect to be worse off, but edtech can bolster impact – survey

The majority of education institutions expect to be worse off in the long and short term as a result of coronavirus, a flash survey from HolonIQ has revealed. However, by enhancing edtech provisions they expect to bolster a drop in face-to-face enrolments.

According to the data taken from 700+ respondents to the March HolonIQ Global Outlook survey, 91% of respondents indicated they will be moderately (69%) or substantially (30%) worse off in the short term due to the COVID-19 pandemic.

“COVID-19 compels the world to be more connected”

While in the short term, 50% of providers of education technology services expect to be worse off, a third expect to be better off due to the pandemic.

“Presumably [they are] expecting their tech services to be more in demand as institutions pivot to online delivery,” the authors noted.

But while long term expectations for some “paint a more positive picture”, the authors also anticipate that “overall the market is expecting reduced demand compared with six and 12 months ago”.

Compared with the previous survey, three times (40%) as many respondents signalled they expect less demand going forward. In September 2019, this figure was 12.6%. 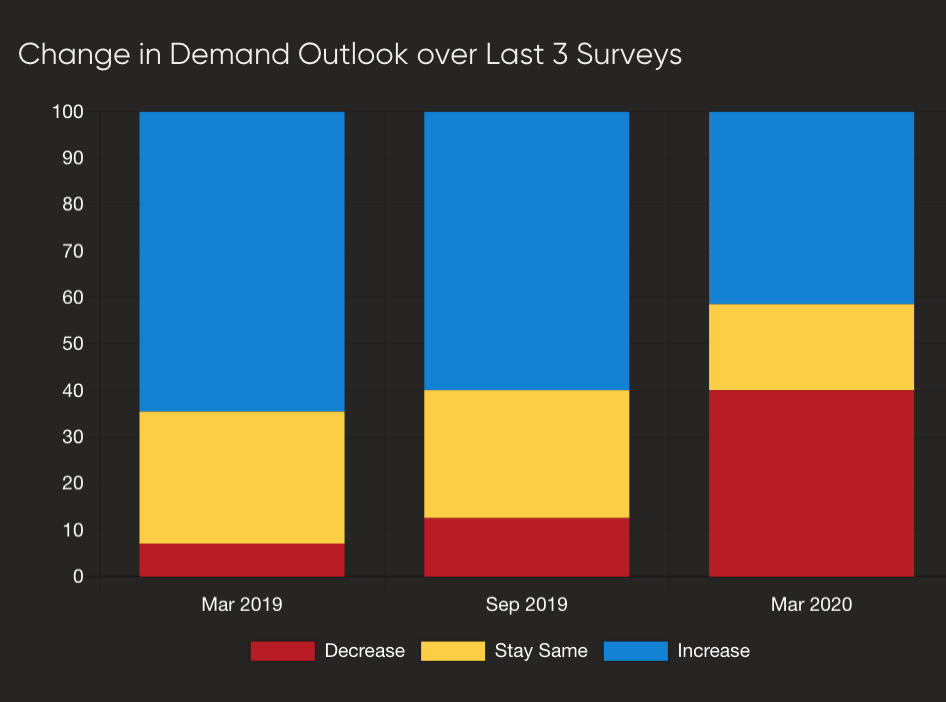 However, the future is not bleak for all as 40% indicated they expect an increase in enrolment and demand in the next six months.

While respondents in Oceania expect “the biggest dip in demand”, those in Africa and the Middle East show “the greatest confidence” in growth outlook.

In North America, 49% of respondents said they expect growth in demand over the next six months.

“COVID-19 compels the world to be more connected. It will stimulate collaboration and open up new opportunities,” one respondent in the region said.

Optimism that “the time for online learning has come” are evident in respondents’ sentiment, the survey suggested.

A quarter of all respondents said they identify new technologies as their primary growth strategy, an increase of 10% since September 2019, with little doubt that COVID-19 is a key driver of this change.

Fewer respondents indicated that new product development was their top driver of growth (from 26% to 21%), while growth into new markets has seen a dip of 6% (from 27% to 21%).

Meanwhile, growth in existing markets (25%) and growth through operational improvements (9%) are steady over the last two surveys.

“The market is adjusting rapidly from face-to-face to online. This has re-focused organisations previously reluctant to change, to invest in edtech and new opportunities for flexible delivery,” noted one UK respondent.

As The PIE News recently reported, along with a growing number of institutions turning to online solutions in the face of the crisis, many edtech businesses are also offering free services to universities, schools and students to limit the disruption being caused.

“I am hoping that with COVID-19, educational institutions will look at technology solutions to help solve the challenges in giving skills to students and I would like to see a part of that solution become full-time long term… opportunity for a new norm,” said a survey respondent from India.

With regards to workforces, according to the survey decreases are expected to double, increases are reduced and the collective view of disruption is now weighted heavily to happen before 2025, if not the next 24 months.

Last March, only 7% of respondents expected a decrease in the size of their organisation’s workforce within the next six months, with that figure jumping almost four-fold to 26% in the March 2020 survey.

However, regional differences are stark with 45-50% of respondents from North America and Asia expecting growth in their organisation’s workforce within the next six months, compared with less than 10% from the Middle East and 20% in Europe.

“We will have short term cash flow challenges due to schools not being able to pay, but long term gain as schools will now be more open to online tools post [coronavirus],” said one North American respondent.

While potentially a challenge for skills shortages with their current workforce, some respondents see the possibilities offered by online delivery for institutions.

“[It] could be a pivot point in the adoption of online technologies by legacy providers,” said one respondent from Asia.

The post Most institutions expect to be worse off, but edtech can bolster impact – survey appeared first on The PIE News.