The third annual PIEoneers Awards was held on September 19 at London’s historic Guildhall, with CEO and founder of Diversity Abroad, Andrew Gordon, taking home the trophy for his outstanding contribution to the industry.

With nominations spanning 28 countries, 16 winners were selected by a judging panel of 26 international education specialists.

“The uphill battle of our team has now been acknowledged”

The event, which attracted over 400 attendees from around the world, saw winners recognised for their achievements in areas including championing diversity (International Houses Worldwide Group), language education (Bucksmore Education) and agencies (IDP Education).

“It was really heartening to have so many applications from around the globe,” said The PIE‘s CEO Amy Baker.

Held in the Guildhall in central London, the venue provided an unforgettable backdrop to the industry’s celebrations.

With almost a 100% increase in nomination, the shortlisting process proved more challenging than ever for the 26 judges.

Widening access to higher education, with particular focus on access for refugees, was a theme represented by many of the finalists this year.

Their crucial role in the sector was reflected in the nomination of SPARK as the PIEoneer of the Year in recognition of its work in post conflict societies, ensuring refugees have access to higher education.

“The uphill battle of our team has now been acknowledged: we became ‘PIEoneer of the Year 2019’!,” SPARK regional program director Giselle Schellekens, representing the organisation at the awards night, said on social media.

“This is an excellent organisation with tremendous impact that is deserving of this special award,” Daniel Obst, one of the judges, said of SPARK.

With Gordon’s nomination for the Outstanding Contribution to the Industry award, work to foster diversity in the international education space by ensuring access for students from underrepresented backgrounds also took centre stage this year.

Accepting his accolade, Gordon said that while the industry may not be in the business of saving lives, its role in changing lives is worthy of being celebrated. 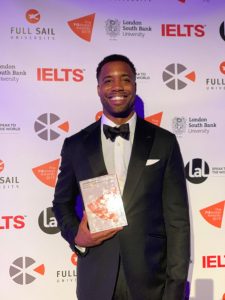 “What a trailblazer in the field of international education! Andrew’s hard work and dedication to “disrupting” the usual and focusing on underrepresented students is honourable and much needed in today’s day and age,” judge Randall Martin commented on Gordon’s nomination.

“I look forward to seeing what comes next from this passionate leader and how his work will transform international education for the next decade.”

“What a trailblazer in the field of international education”

A loud cheer greeted the Association of the Year award winners: the Universities UK International team, fresh from celebrating the return of a post-study work visa for international students in the UK after years of campaigning.

Director Vivienne Stern accepted the award on stage among messages of congratulations coming from all over the international higher education industry.

The after-party, held in the Old Library at the Guildhall, saw winners, finalists and attendees celebrate and dance until late.

The PIEoneer Awards will be held in the marvellous Guildhall once again in September 2020.