Surge in int’l students at Irish HEIs, most ‘positive’ about their experience – survey

International student numbers at Irish third-level institutions have surged over the last three years, with 2019 marking an increase of almost 27% on 2016 figures. But while the majority (78.6%) reported their overall experience as positive, a divide between international and Irish students was also noted.

According to the report published on StudentSurvey.ie, the international student population grew from 11,406 in 2016 to 14,412 this year – considerably more than the 5.4% growth in the number of Irish students at HEIs in the country during the same period.

‘The increase isn’t surprising and is roughly on target”

The report also included a survey on the level of ‘student engagement’ between students and their third level institution, polling a total of 40,558 respondents of which 10.9% (4,409) were international.

It revealed that 78.6% of international students were generally positive about their teaching and learning experiences, with 25% reporting ‘excellent’ interactions with academic advisors in 2019 compared to 19% of their Irish counterparts.

Additionally, postgraduate research students from overseas reported a particularly high frequency and quality of engagement in personal development initiatives such as career advice, placement and internship, and training in entrepreneurship and innovation. 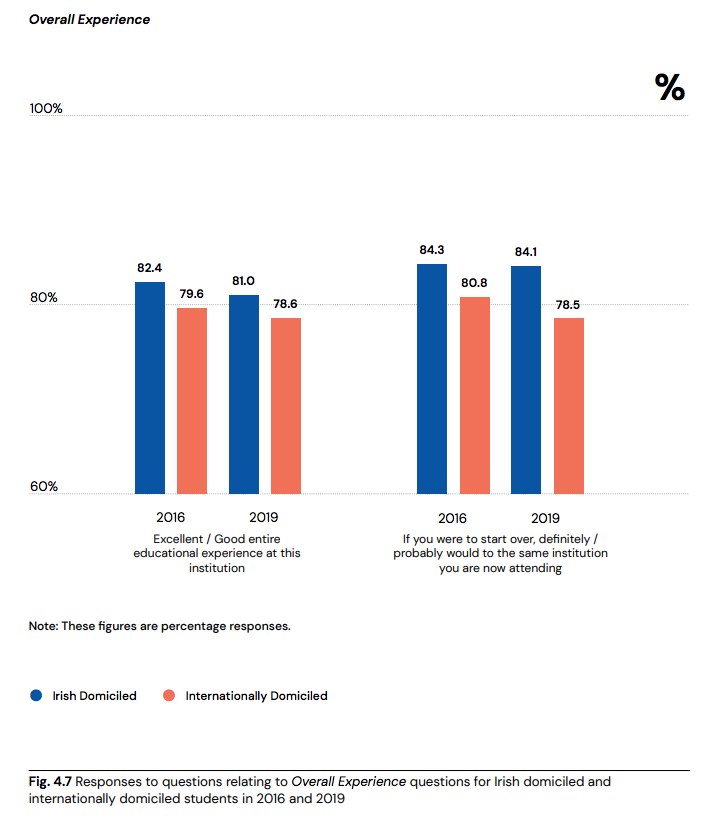 However, there was also evidence of a divide between international and Irish students, with some international respondents stating that they found it difficult to make friends in the classroom context as there were so many different class groups present.

Further to this, “the active involvement of international and domestic students in the organisation of activities is required to promote successful integration” the report explained.

Ireland launched an international education strategy in 2016, with the goal of bringing the total number of students coming to the country for their higher education and English language studies to 176,000 by 2020.

Speaking with The PIE News, executive director of the Irish Council for International Students, Sarah Lennon said that the result of the survey is generally “positive”.

“It is the Irish government’s policy to increase international students… as a result, the increase isn’t surprising and is roughly on target,” she noted.

“The results show some very positive signs around international student engagement with the staff in institutions and services such as career guidance and this is welcome.

“It is, however, slightly concerning that there was a variance with these interactions and those between international students and their peers, which weren’t as positive,” Lennon added.

She explained that ICOS would be concerned if such findings became a trend and that the integration and inclusion of international students need to be managed across all aspects of student life, particularly as student numbers increase.

The sentiment was echoed by Douglas Proctor, director of UCD Global, who said the survey correlates with other data showing limited international student satisfaction with being able to make friends locally.

“In response to these findings, UCD has revamped its program of support in relation to international student integration, with a refurbished UCD Global Lounge serving as the principal hub for activities and events designed to foster interactions between domestic and international students,” he added.

“International students are an important source of income for Irish universities, colleges and English language schools but it’s essential that we don’t just think about international students in terms of the economic impact but also their rights and welfare,” Lennon continued.

“We must also recognise that international students add to the richness of our educational institutions.”

The post Surge in int’l students at Irish HEIs, most ‘positive’ about their experience – survey appeared first on The PIE News.