The lure of work rights for int’l students – Act 2: Students

In the first part of this analysis, we looked at policies on student work rights around the world, their motivations and consequences, sometimes unintended. In this second and final act, we look at the protagonists themselves: the students.

As work rights policies shift the fortune of host countries, they shape the student experience. For most students, the ability to work provides employability skills and better career prospects. For others, it’s the only reason why they can have an international education experience at all. But how easy is it to find a job in a foreign country?

Welcome to the jungle

“On average, [international students] are always at greater risk of exploitation in the workplace, whether we are talking about part-time work during their degree or after graduation,” Simon Marginson explains.

“Employers have greater power over international students because of visa-related processes.”

“Some form of practical experience has become critical for every student”

University career services all over the world can help international students get to grips with their new job market, but the reality out there may be quite difficult.

A spokesperson from the University of Otago in New Zealand, says that not all employers may be skilled in intercultural communication and appreciate cultural differences.

Students may find themselves in ‘under the table’ employment or being paid less because employers know how difficult it is for them to find a job. “This often tends to be an employer who is from the [student’s] culture,” they add.

Stories of international students being exploited in the workplace or working in low-skill jobs often make headlines. In 2017, a survey titled Wage Theft in Australia revealed 43 per cent of student and working holiday visa holders were paid significantly less than minimum wage.

In Canada, a 2016 investigation by the Globe and Mail found that many international students on the post-study work program were in low skilled jobs with median earnings less than half that of other graduates, John Shalagan CEO of JTS International Higher Education Consultancy says.

“International students said that it is difficult to find good jobs before they have permanent residency,” he adds. To Shalagan, this is testament to the importance of work rights during study, as it may take some time to acquire the soft skills and connections to find the right job.

Instances, when employers force students to pay their sponsorship visa fees, have also been reported to The PIE.

“I have heard cases of employers forcing their employees to pay the expenses to get them a work visa – that’s illegal, and those folks get fined,” US immigration lawyer David Ware says.

But even when no exploitation is involved, international students may still have a hard time making the case for themselves.

Their biggest enemy is sometimes paperwork – and costs. “In order to keep an international student long-term, the employer must undertake an expensive, risky work visa process,” Ware explains. He adds that in Canada, where employer sponsorship is more streamlined, many more students get sponsored.

For students intent on remaining in the UK, where it remains very difficult to find sponsored employment by graduation date, entrepreneurial action is called for.

When Tripti Maheshwari enrolled in her master’s degree at Cass Business School in London in September 2014, she was two years too late to enjoy the post-study work rights period granted by the Tier 1 visa and had to try and find a job by the time her student visa expired.

“It’s a big step to move away from home, you just arrived in the country, going through cultural adjustment… and you suddenly have to look for a job,” she explains.

Tripti applied to jobs on her own, but it didn’t work out.

The main problem for her was lack of information on which companies are actually willing to sponsor international graduates, and so came up with the idea of designing a platform where licensed sponsors and international students could meet.

She then quickly applied for a Graduate Entrepreneur visa and founded Student Circus, a service now counting over 10,000 subscribers and partnering with various UK universities.

But the memory of that frantic job search at the end of her master’s degree is still present. “It was a nightmare,” she says. “I was applying to anything without doing my research – out of desperation because there was no time on a student visa!”

For UKCISA chief executive Dominic Scott, the Tier 1 visa was “a child of its time” and it’s unlikely to come back.

“We are now in a very different political climate,” he explains.

In the last year of its implementation, 2011, 88,000 students got permission to stay in the UK after graduation and work, Scott says. Nowadays, it’s about 5,000.

“It’s a huge downturn,” he adds. “But I think we still have a reasonably good offer, it’s not all doom and gloom.”

According to Scott, the importance of work rights is not necessarily in their role as an incentive for students to choose a destination over another, but in the increasing importance of work experience as a key element of education.

“Some form of practical experience has become central, and critical for pretty much every student,” he says. “It’s becoming a normal part of finishing your education.”

The justification for work rights, he explains, is work experience – not immigration.

In Australia, associate professor at Deakin University Ly Tran has been finalising a study on the impact of the introduction of the 458 post-study work visa on international graduates’ employment opportunities. The picture is not the most encouraging, despite the positive education enrolment stats that we are all aware of.

“The term an employer used is: ‘Why buy the burden?’”

Although the graduate visa gives students time to build connections and improve their English, it doesn’t give them any advantage in the job market, Tran argues.

“[Participants] were of the view that Australian employers have no interest to recruit international graduates on temporary visas,” she explains.

“Our interviews with employers show that they don’t see any advantage of taking international students over domestic ones but see it as being complex and uncertain. The term an employer used is: ‘Why buy the burden?’”

An earlier study by Tran showed that international students face another problem in the workplace: the stigma of being seen as ‘migration hunters.’

According to Ware, discrimination like this is not common in the US. “99 per cent of employers don’t discriminate against international students,” he says. But he adds it’s openly acknowledged that certain post-study work visa routes are used to obtain green cards.

“It’s common knowledge that some students, especially from certain countries, come to study here to gain a foothold in the US job market,” he says.

While most migration-intent students follow official pathways, a minority fuel ‘visa mills’ – private institutions whose purpose may not be offering education, but the work rights attached to them.

“They think that Indians are just for the permanent residence”

Although definitely in the minority, ‘visa mills’ are a headache for policymakers and for the industry alike. For some students, the bad reputation of some sectors translates into an obstacle to find employment.

Based on a four-year research project, Tran’s study revealed that this perception had led to “disconnectedness, vulnerability and marginalisation” for students from vocational colleges in Australia.

“They think that Indians are just for the permanent residence… employers don’t want to employ us,” said one of the students interviewed. 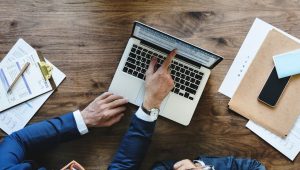 Paperwork can be an obstacle for job hunters. Photo: rawpixel/pixabay

“I would not be here still”

If for some students work rights provide a pathway to migration or a useful addition to the CV, for others, part-time work rights while studying are a necessity to fund an experience abroad.

“Being a non-EU citizen when I started studying in Denmark, I would have been at a loss for if not for being able to work,” recalls Trent Coelli, an international study advisor at the Technical University of Denmark. Originally from Australia, he moved to the Danish capital for his bachelor’s degree.

“I had not been allowed to work alongside my studies, I would not be here still,” he says.

Naveen Chopra of Indian education consultancy, The Chopras, notes that work rights are especially important for students coming from a lower socio-economic background – and that’s the group of Indian students which was most impacted by the removal of work rights in the UK from those enrolled at private institutions.

“If there are no work rights, only students from richer families can think of studying abroad,” he explains.

Could work rights and post-study work rights improve access to an international experience to students from all backgrounds, then?

“If there are no work rights, only students from richer families can think of studying abroad”

Marginson urges caution, but he concedes that it could have an impact.

“It would not be wise to claim that post-graduation work rights could fundamentally democratise international education,” he explains. “But these rights may have a marginal effect in making opportunities more egalitarian.”

Who benefits from higher education?

The future is unclear. While the recently released MAC inquiry report has dampened hopes of a new post-study work visa in the UK, New Zealand has recently overhauled its policy, which is now the second-most generous among the traditional destination countries.

Marginson mentions first Canada, then Australia, as the countries with the best work rights policies. But those are inevitably tied up with how countries perceive the benefits of migration, he says.

“The main economic role of such visas is to facilitate the migration of skilled labour,” he says.

“Post-study work visas are the bridge between education and migration. It is clear to [Australia, Canada, USA] that countries gain significantly from migration, and most of all from skilled migration…though the UK seems more ambivalent about the net economic benefits.”

Designing work rights policies that benefit international students and the industry, work for the economy and comply with national migration policies is a delicate and complex task. But striking a balance may end up benefiting the wider community as well as the student.

As Marcel Gerard, a professor of economics at the Université Catholique de Louvain in Belgium, recently told The PIE News, there are two beneficiaries of higher education.

One is the graduate. The other one is the country where they decide to work.

This is the second part of a two-part long read on work rights, which first appeared in Issue 18 of The PIE Review. The first chapter, ‘Policies’, was published last week. You can read the latest news on post-study work here.

The post The lure of work rights for int’l students – Act 2: Students appeared first on The PIE News.