Sri Lanka outlines ambitions to be an education hub

Sri Lanka is keen to establish itself as an education hub in Asia, trading on its strategic location, tourism appeal and significant development planned – which includes a US$1.4 billion ambitious port city project, funded by Chinese investment.

Indeed, the boards masking the building activity around the port city site – a major land reclamation project – declare that a world class international school will be part of the major investment and infrastructure project.

Prof. G L Peiris, former vice chancellor of the University of Colombo and until very recently, minister of foreign affairs in the Sri Lankan goverment, spoke exclusively to The PIE News about Sri Lanka’s plans and its “long history” of tertiary education.

Noting that the country is already attracting students from Pakistan, India and Malaysia, Peiris said the country was keen to ensure its 13 universities offered career-ready education.

“Sri Lanka is involved in a very ambitious program of innovation in education and one of the features of that program is closer links with the business sector,” he said.

“Universities are no longer isolated from the mainstream…, on the contrary, a conscious attempt is being made to ascertain the needs of the marketplace; what are the skills and aptitudes for which there is a commercial demand?” 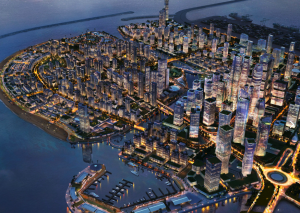 An illustration of what the new Colombo port city could look like.

He added that private institutions are being encouraged to set up in Sri Lanka because “the state university system is reaching saturation point”.

And he said that the sizeable investment into Sri Lanka would help the country be noticed: “Students, universities, academics will be encouraged to look seriously at Sri Lanka as a place to study and to work.”

Peiris was speaking at the Navitas Business Partners Conference, held in Sri Lanka to coincide with the 20th anniversary celebrations of ACBT, a private college which is co-owned by Navitas and a local shareholder.

Erath Karunaratne, executive director of ACBT – which has three campuses in the country – told The PIE that Sri Lanka’s safety and rising tourism appeal would help enhance the country’s study hub ambitions.

“There are not many locations that you can compare [Sri Lanka with] for cultural experiences, nightlife, beaches and it is cost-effective,” he said.

He added that with high literacy rates and English spoken by 90% of the population, it is easy to navigate linguistically.

ACBT enables students to study in Sri Lanka and earn a degree from Australia’s Edith Cowan University, transferring to Australia for the final year of study.

“What has proved very popular in recent years are these ‘sandwich courses’,” acknowledged Peiris, explaining that many students complete a foreign degree in part in Sri Lanka and then with the partner institution in countries such as Dubai, Malaysia. “That is becoming exceedingly popular,” he said.

The post Sri Lanka outlines ambitions to be an education hub appeared first on The PIE News.