ICEF has celebrated its tenth year of agent workshops in Latin America with a two-day event in Brazil attracting record growth figures for attending agents and institutions.

Described as “fantastic” in an ICEF statement, these figures reflect the recovering picture of Latin American international education, in both directions, with Spanish and Portuguese studies growing in popularity across Asia and EMI courses in Brazil continuing to attract the traditional European or North American mobile students.

Although 85% of the attending agents were Brazilian, and BELTA president Maura Leão gave an address during the seminar part of the event, other prominent Latin American stakeholders such as Gabriela Ardito, president of the Argentine study abroad association, attended and addressed the assembled agents and educators.

A decade after the first ICEF fair in South America, Ireland has become a focus for agents in the area as such a high percentage of Ireland-bound students come from Latin America. 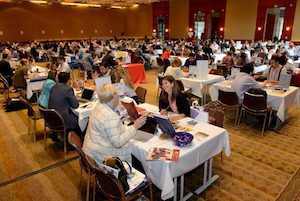 The Irish Consul General, Barry Tumelty, and Sarah O’Sullivan of Education Ireland presented the benefits of Irish education to attendees, with the hope that Ireland and Irish institutions can continue to build connections with the region.