The vice president of EIC Education in China, Bei Guo, has written a book aimed at the Chinese millennial market (and at their parents) which is already at the top of one online best-seller list in the ‘Life guidance’ listing.

Titled Empowering your Future, the book aims to break through the dogma of achieving high grades, to really analyse and focus on how to ensure Chinese young people will be truly successful. Guo argues this can be achieved if they have a nimble, rather than fixed, idea of attainment and work on a complex range of skills beyond academic grades alone.

“Having a life plan that can shift is essential”

Guo said she felt there was a gap in the market for really good advice about life planning for teenagers, despite hundreds of books available at the pre-kindergarten phase and a plethora of career success titles aimed at the young graduate professional.

Guo – herself a high achieving student who graduated from University of Tokyo and Harvard Business School, as a masters student – says she was motivated to write the book because the future world of work will change rapidly, and students need to focus on developing “grit” and understanding their motivation rather than only striving for academic success.

“The reason I wanted to write the book is really [to] try to help Chinese parents and students to understand the true source of [the] rules behind the decisions in their life,” said Guo.

After extensive research and through her experience at the helm of an education counselling company, Guo concluded that developing curiosity and determination to learn is what Chinese students should strive for; realising that discipline to acquire new skills is something that can be trained, she explained.

“What is difficult is actually… what I would call the core capability and mindset, that actually consists of grit, curiosity and humanistic thinking,” she said.

These qualities are at the core of a four-layered model her book espouses: the other layers include skills like cross-cultural adaptability, entrepreneurship, multilingualism, creative problem solving and life designing capability. 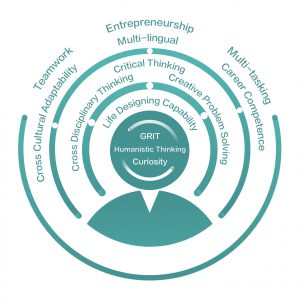 Having a life plan that can shift is essential, says Guo, as the future world of work will move so fast that higher education might not always be able to keep up.

She believes too many Chinese students may harness their goals to an academic qualification alone as their idea of success.

Having a life plan that can pivot in more than one direction will be the hallmark of successful graduates of the future, she says.

The book was officially released on 17 October 2018 and was immediately ranked #1 in Inspiration/Life Guidance category on JD.com, one of the largest online book retailers in China.